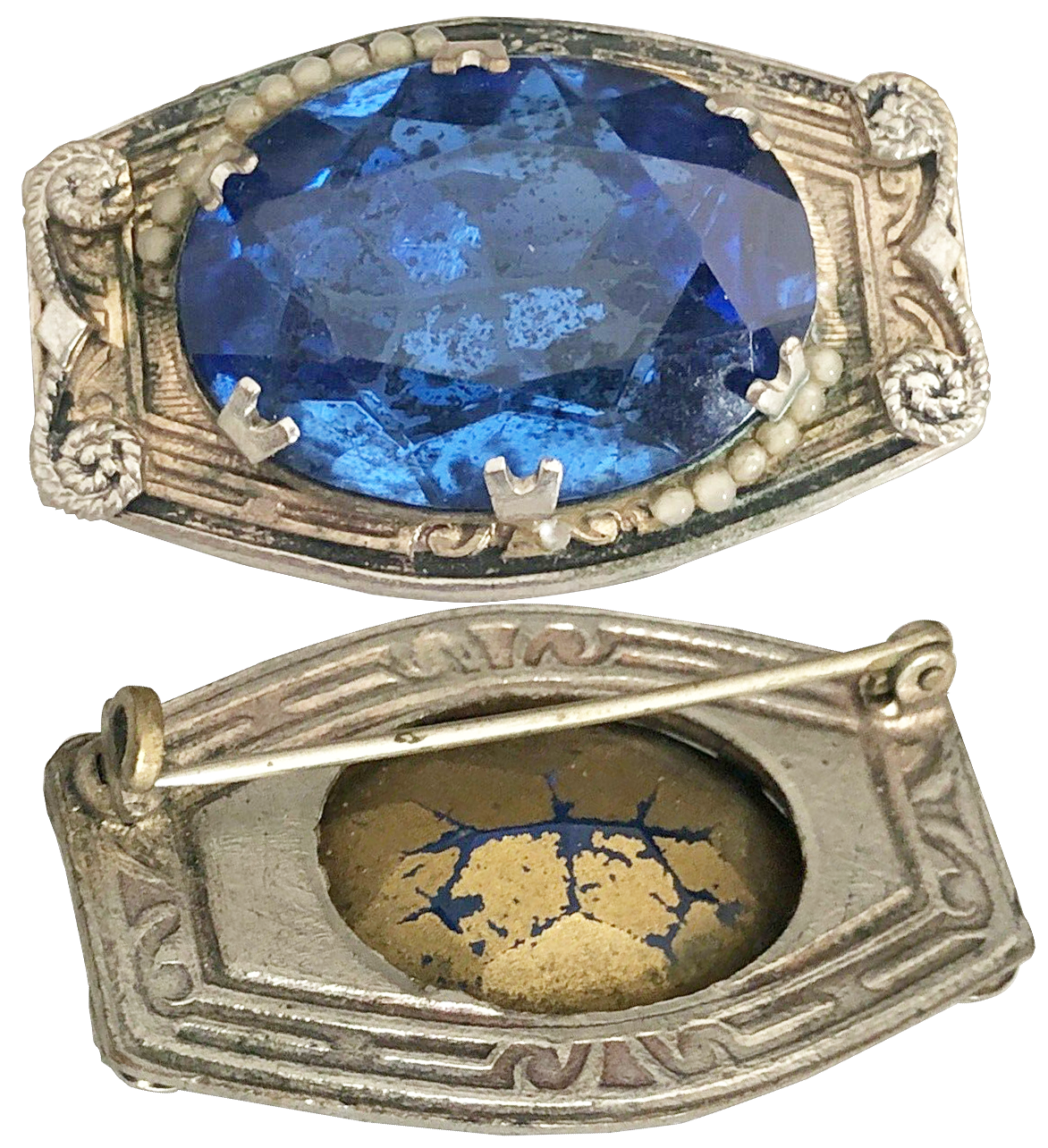 Here is interesting and historical patent from the past that I discovered while searching for gemstone and diamond diagrams for Perfect Diagram.1 It was filed March 27, 1885 and granted June 30, 1885 to an Ernest Edward Kipling.

Do you know these words - bizet, culasse, collet and strass? Well if you have read my other articles, you probably know what is strass. And collet is not a type of stone setting but a part of a diamond. Okay, enough suspense, here they are:

Culasse - “The same as pavilion.”3

Strass – “A brilliant paste made of leaf glass and used to simulate various transparent gemstones. It is a borosilicate of potassium and lead, with small quantities of alumina and arsenic. When uncoloured it was used to simulate diamonds, being transparent and very refractive, although much softer; the addition of metallic oxides and salts produces coloured strass to imitate most known gemstones. It was named after Georges-Fedéric Strass (1701-1773) who was born at Wolfsheim, near Strasbourg.”5

Bizet – I could not find a definition of this anywhere. But maybe a quote from the patent will give you a hint. “… principal facets on the front of the stone which is known as the ‘bizet,’ …”6 I would guess it to be the crown.

A foil back gemstone is defined as “An inexpensive gemstone or a piece of faceted glass that has been backed with a thin leaf of metallic foil, either silver or other color, to simulate the brilliancy of a diamond or to impart or improve the color of a colored stone.”7

The trade dictionary had another interesting definition. It stated that “foiling” is a “… thin sheet of metal silvered and burnished and afterwards coated with transparent colors; employed to give color or brilliancy to pastes and inferior stone.”9

Of course, pastes are known by gemologists to be glass. Perhaps strass was the preferred glass. 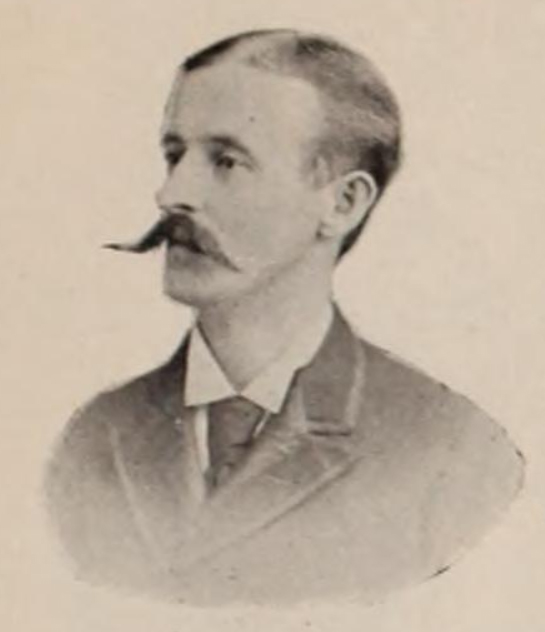 He was active in the jewelry industry and politics of the time – being the Director of the New York Jewelers’ Association in 1891.13 He was “an importer of precious and imitation stones. Manufacturer of the patent foil solid metal back Rhine stone brilliant.”14

That patent was not the patent that I had discovered which was granted June 30, 1885. I had to search for the earlier patent and when I discovered it - it was granted in February 28, 1882. Now we can discuss them together.

Now, in the 1882 patent, we are looking at a semi-doublet,16 with a crown made of any colorless stone or glass with a silver coated bottom and a protective varnish. It was titled “Imitation Diamond.”

In contrast, the 1885 patent was titled “Artificial Diamond.” Are you wondering why he called his invention an “artificial diamond” if there was no diamond component? So, did I.

What does the first patent tell us?

The description mentioned the proportions of a brilliant diamond of the time! Although his patent is for adding a coating to the bottom of rose-cut diamonds, he described in detail a brilliant17 as well. Remember the quiz with the four terms? Here they are in the patent.

The patent describes “The most ordinary cut is what is known as the ‘brilliant.’ As a general rule, the back of the diamond that is inclosed [sic] in the setting has double the depth of the face and is known as the ‘culasse,’ and the back is cut into facets exactly corresponding with the position of the principal facets on the front of the stone which is known as the ‘bizet,’ which is one-third of the whole depth of the gem, and the angles which the facets at the back make with the axis of the stone are required to be such that all the light reflected from their surfaces may fall within the central flat surface on the part of the stone called the ‘table.’”18

The patent in describing the rose-cut diamond declared that the “… rose-cut heretofore the gem has no culasse, no pavilion, and no collet.”

The patent states that he uses any number of stones that are transparent and without color.20

What can we learn from the patents?

The patent tells us that the widespread approach to applying a silver coating on “… imitation diamonds made from glass or other transparent material in which the back of the stone is rendered reflective by a silver deposit or other bright coating. The ordinary method of applying this coating is to deposit the silver from a solution of ammonia nitrate of silver by means of a reducing agent – by preference tartrate of soda or potash, (sel de Seignette), or tartrate acid – the face of the stone being protected by a mixture of rubber and gutta-percha.”21

However, when discussing backing gems with silver foil it was stated that “… silver-foil has been used for the same purpose. To protect this coating, an alcohol or essence varnish, which has no oxidizing effect upon the silver, is applied over it.”22 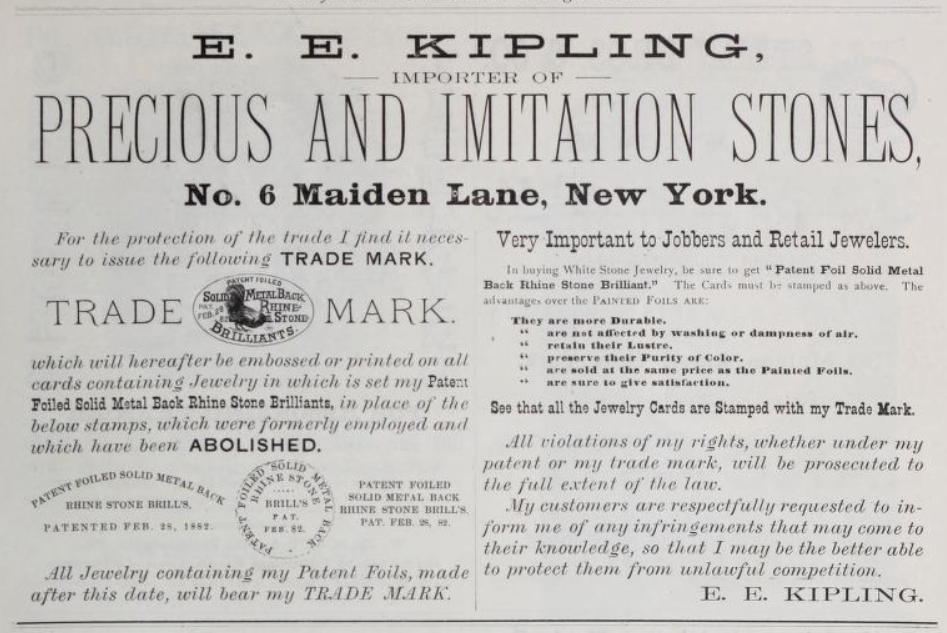 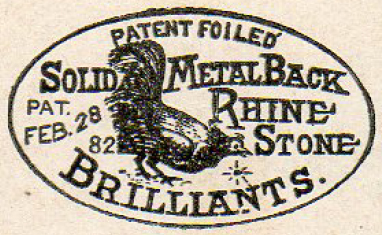 
The trademark was specifically used by E. E. Kipling in their advertisements. Note that it states their stones to be Rhine stones with a solid metal back. But most curious was the mention of brilliants and not rose diamonds. But neither patent mentioned brilliants as being foiled but rose diamonds.

Although understanding how foil backed gemstones were made is of interest to appraisers. The patents reveal diamond cutting information and terms used during the period – that are of interest to gemologist-appraisers as well as jewelry historians.