DOUBLE DOWN on DOUBLETS 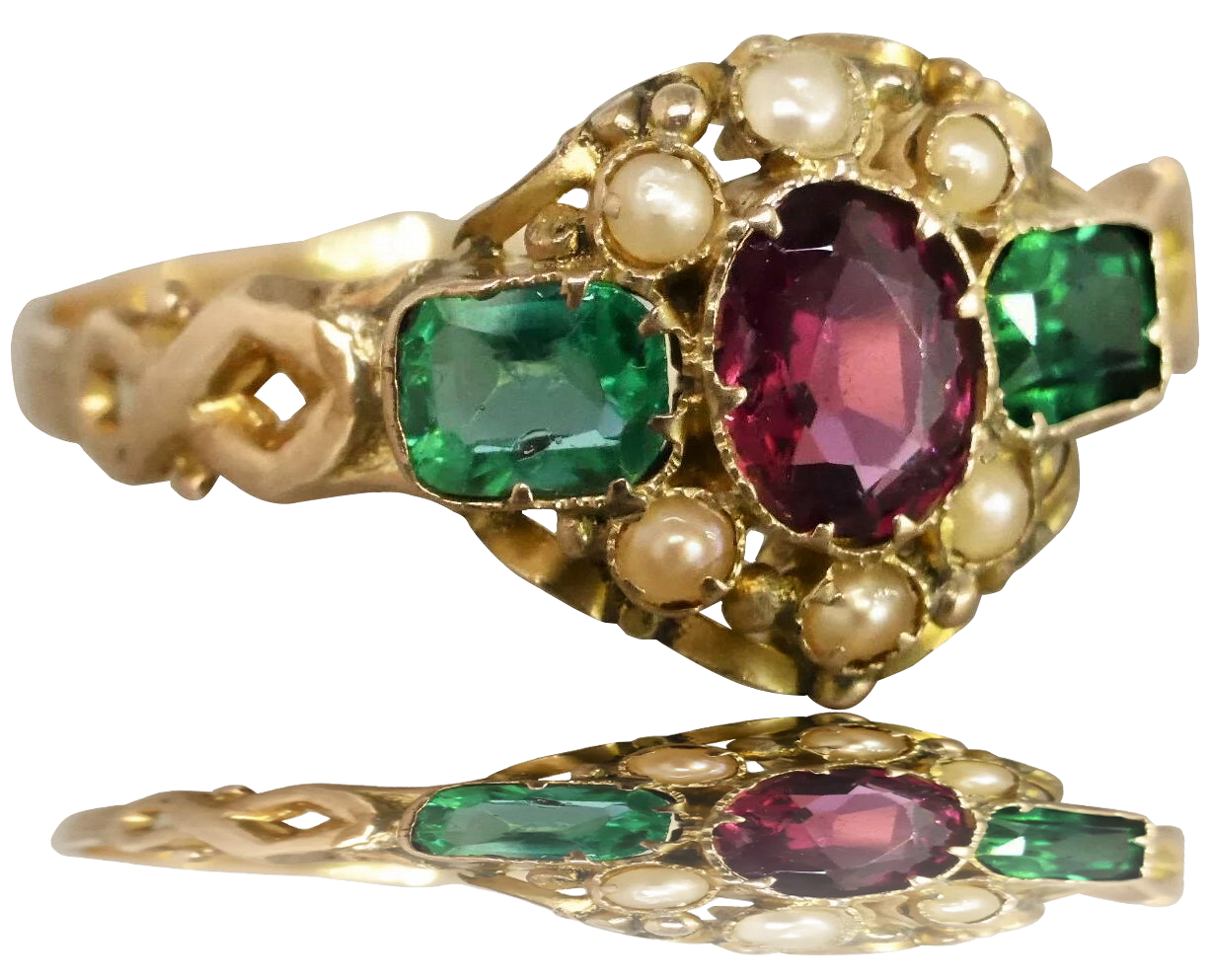 If you are a historian, perhaps a jewelry historian, finding a resource that states information about jewelry or gemstones that was rendered at the same time is like discovering the Dead Sea Scrolls. While researching antique cuts for the gallery of plotting diagrams (Perfect Diagram) in the U.S. Patent database, I stumbled on a patent for doublets. 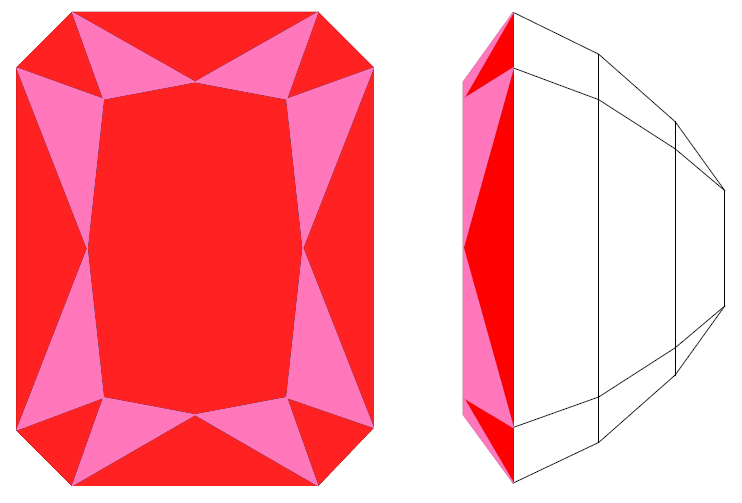 As a gemologist, I recall being taught what doublets were. They were basically glass with a garnet top.1 The top was to add durability to the assembled gemstone. The color of the glass dictated the color of the doublet and the red of the garnet would not be seen. Online, it is stated that these doublets were being created in the mis-1850s until the early 1900s.2 These imitation gemstones lost popularity when synthetic gemstones became plentiful. Notice that in the illustration, the red top (crown) is the garnet and the lower portion (pavilion) is glass.3

Reading the verbiage of the patent reveals some interesting information. These assembled gemstones were called “doublets” or “fire doublets.” I wonder if the “fire doublets” was a trade term for those fused by heat. We are told by resources that the garnet top added durability. His invention lessened damage to the edges were the two materials come together.

Doublets allowed a jeweler to create pieces needing several gemstones of uniform color and size as well as items with center stones of a desired color. Thus, expensive and inexpensive gemstones could be imitated. However, since the crowns were made from natural garnets, a limitation of size existed. One could not readily produce a doublet of large size since garnet crowns were limited. Nature just does not produce large garnets to satisfy a commercial demand.

The patent mentions the size restriction as a reason for his new approach to making doublets. By reducing garnet top to the top of the crown and not the entire crown – larger doublets can be produced. Thus, the same sized garnet crown could now be used on a larger glass base to produce larger gems. But he also claimed the invention would increase brilliance as well as transparency. 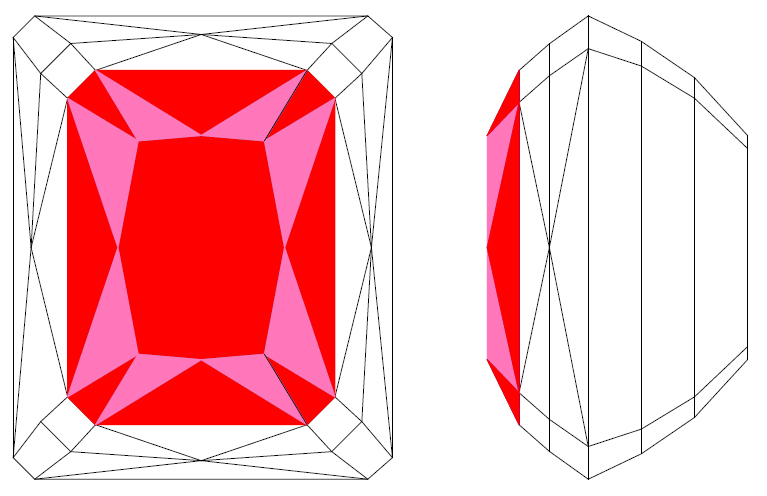 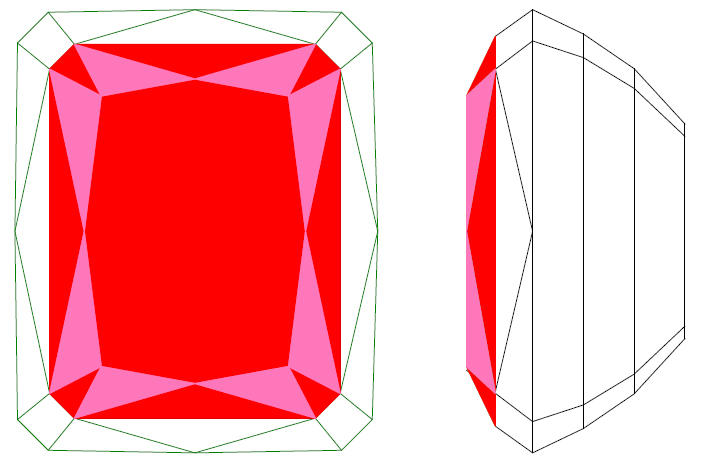 Three gemstone cuts were shown in the patent. However, the verbiage in the patent did not limit the patent to the cuts illustrated. The first cut was stated to be the commonplace cut seen in the trade. The additional two cuts were his and if seen, can be attributed to Mr. Bruhl. However, the thrust of his invention is the use of a garnet top to the upper half of the crown. Thus, round cuts, for example, with a crown that is half garnet and half glass should fall into this patent. Notice that in the two illustrations, only a portion of the crown is garnet (red).

What can we learn?

What did we learn from this patent? Firstly, that doublets were made by both gluing and fusing under heat. Doublets with a partial crown of garnet can be circa dated from 1873 and after.4   5 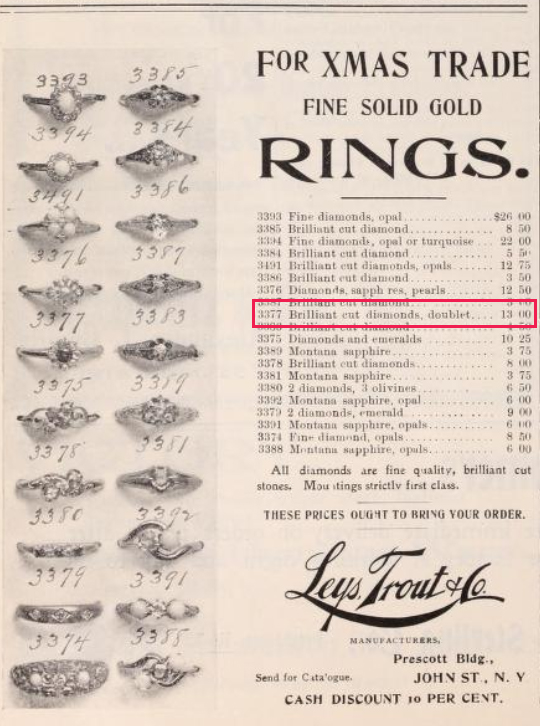 But wait, there is a second patent for an assembled gemstone. This one, instead of specifying a garnet topped crown, details an assembled stone with a crown and pavilion of any material but a layer of colored material capping the crown.

He claimed that his invention would “… minimize color effects of the genuine stone, and thus better preserve the distinctive color of the artificial body, while effectively protecting the latter.” In other words, the garnet portion of the doublet would not have any detectable red color. Basically, the crown does not just have a layer but layers for each surface of the crown. And yes, he also included curved top gems as seen in the illustration.

The patent states that “… The invention is also applicable to diamond doublets and enables me to apply a genuine facing so small relatively to the body that no combinations of shades or colors results, the purity of the “white” body being fully preserved, while the body is effectively protected against friction.”

Most likely, a diamond doublet is not really a doublet with a diamond crown but more likely was referring to using the garnet covered strass to imitate a diamond.

Back to Circa Dating

If you encounter a doublet with all surfaces of the crown comprised of garnet, but not the entire crown, it is one of these patented gemstones. You will know that it is circa 1890.

There are several other patents on coating or making doublets … but they will have to be detailed in future articles.