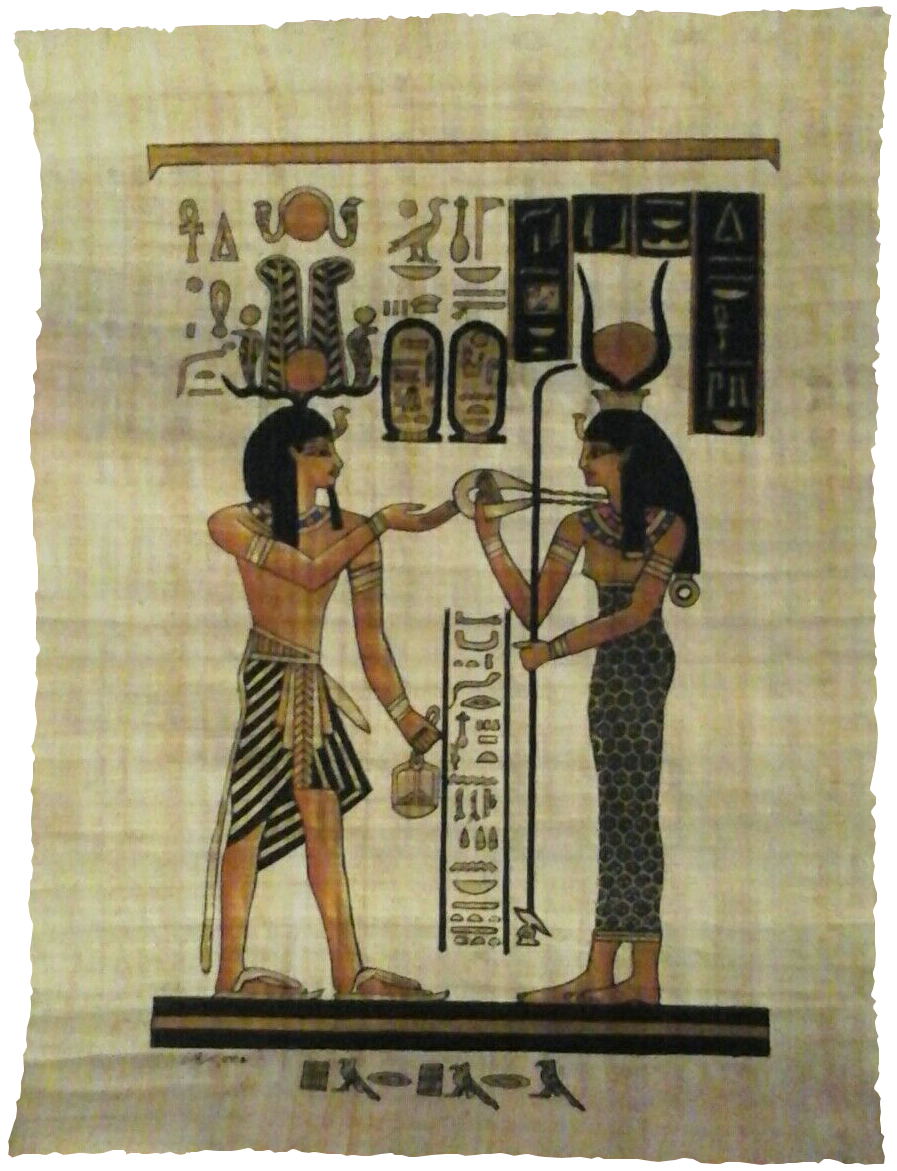 Put on your Indiana Jones’ archaeologist hat and follow me into the ancient Egyptian site called Serabit al-Khadem in the Sinai Peninsula.2 There you will find the workings of ancient turquoise mines that date from 1550-1295 B.C. And nearby are temples dedicated to the local Goddess Hathor3 – better known as the Lady of Turquoise – as evidenced on several nearby ancient, inscribed stelae.

A Picture is Worth a Thousand Words

Egyptian hieroglyphics are older than the pyramids. All ancient writing systems started with pictures representing words or expressions. Eventually pictograms came to represent sounds related to the original word. Thus, ancient written languages were both pictograms representing words as well as the same pictograms representing sounds that form a word based on the pronunciation of the original pictogram words. Hieroglyphics is a writing that is pictural as well as using the sound of a word to act as letter. This is called the rebus principle that can be defined as using existing pictograms’ sounds to create a new word. For example, a picture of a knot and the number two and a bee would be “not to be.” That is the rebus principle. 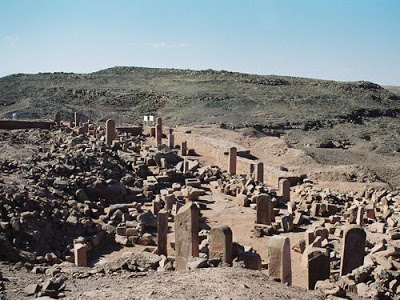 The ruins adjacent to the turquoise mines was explored by William Petrie, a famous English archaeologist and his wife, Hilda in 1905. A piece of rubble was discovered by Hilda that was in the manner of ancient hieroglyphics but was not pictograms but an alphabet. How can this be?

The Egyptians hired migrant workers from Negev, which were better known as Canaanites, to work mining turquoise. They did not read or write in Egyptian hieroglyphics, but instead took the symbols they saw and used them to represent sounds in their native Canaanite language.

The turquoise miners returned to Mesopotamia and spread the newly invented “alphabet” amongst the ancient Canaanites which included the Phoenicians.6 The Phoenicians soon spread the alphabet throughout the Mediterranean. The Greeks and then the Romans adopted the alphabet. Almost all the letters of our alphabet today are direct descendants of hieroglyphics reimagined by turquoise miners!7 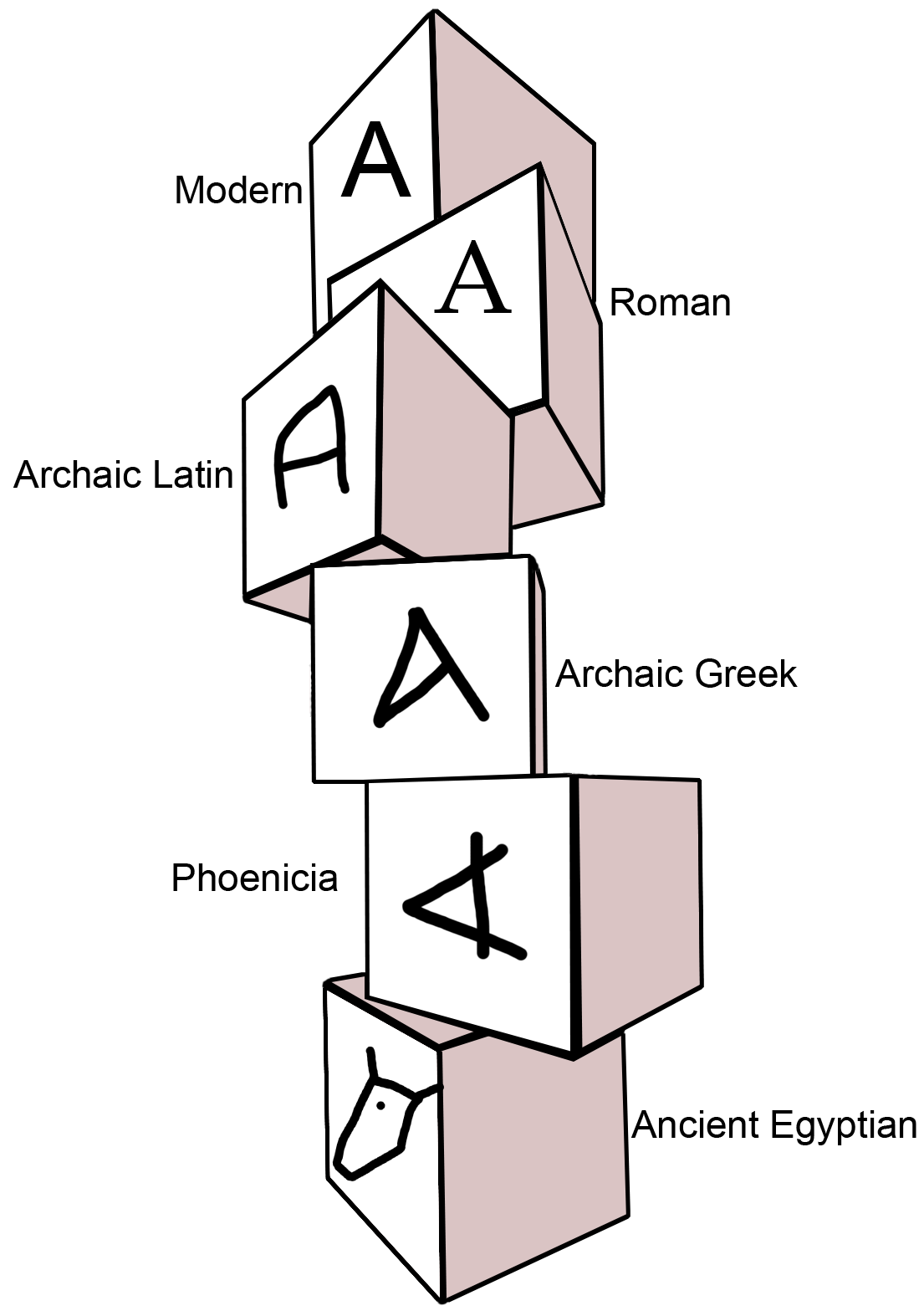 Several alphabets owe their origins to the migrant turquoise miners who created an alphabet from ancient Egyptian hieroglyphics.8 However, let us detail only the first letter of the alphabet - here is the evolution of A from the turquoise miners to our modern alphabet:

Imagine that you are not able to browse in a bookstore or check out a book at the library. Imagine that you are not able to learn from books. Imagine that only the elite and wealthy can own books. No, it is not some tyrannical government banning books but merely the cost of books that severely limits their availability. Then one day books are cheap and everywhere. An information revolution occurs. But first, we need to set the stage with some history.

Before paper became widespread,9 parchment was the basis for pages. Parchment is made from animal skins.10 When the skin had been processed, the bookmaker would use the center as the spine of the book.11 Thus a page of parchment, properly cut to size, was really two pages on each side for a total of eight pages from a single sheepskin. It was awfully expensive to make parchment and a book like the Bible, with an average of 1200 pages, would require at least 150 animals. Additionally, the book would have to have artwork, fancy initial letters and page borders added. In all of Europe, perhaps a few thousand books were produced a year. 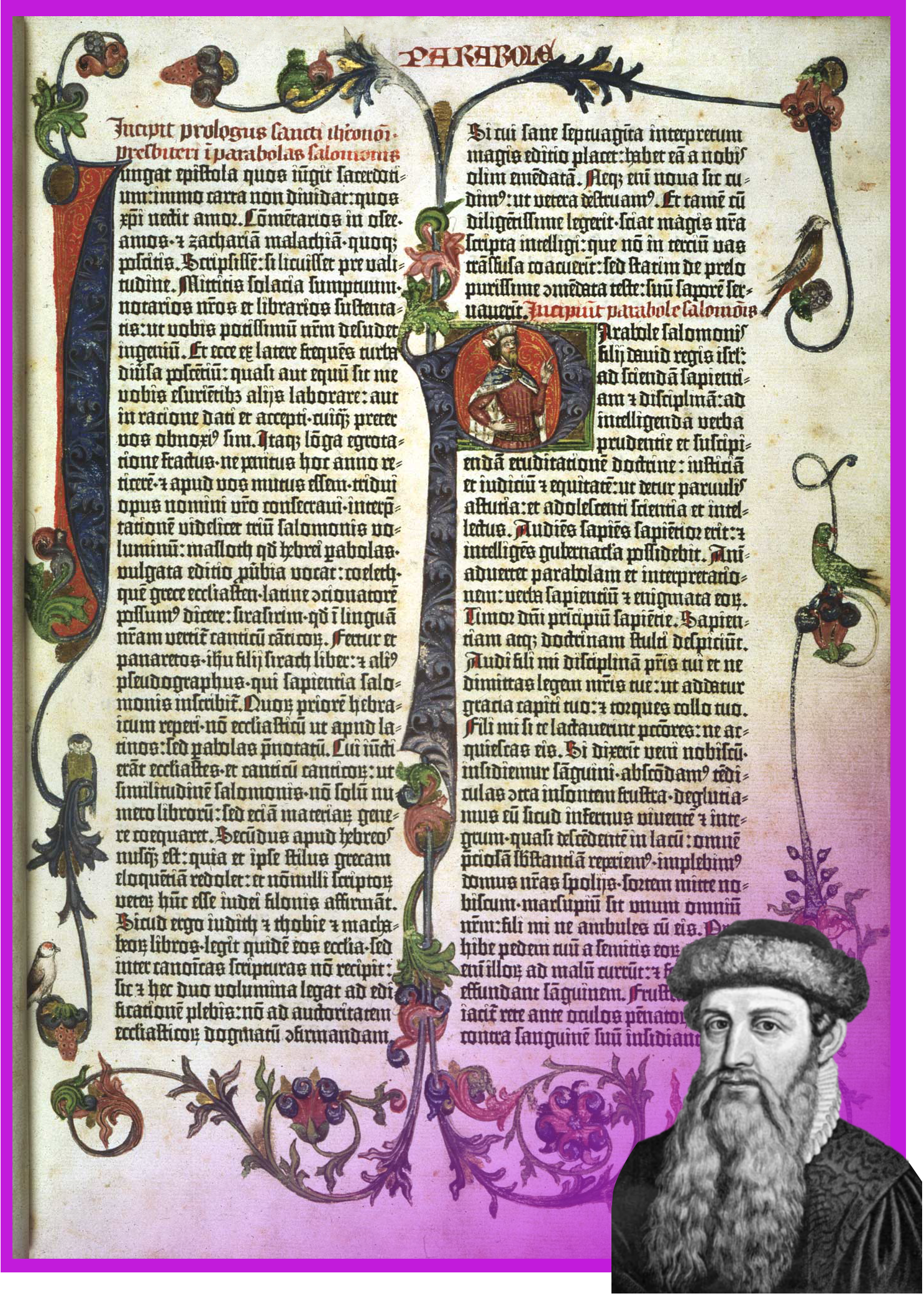 An invention that in 1448 spelled the end of the Middle Ages, by a goldsmith named Johannes Gutenberg who used a lead alloy and a handheld mold to create letters. Making molds and reproducing small metal objects were natural for a goldsmith to do. After all, carving reverse art into rings for pressing into wax as a seal were a part of what goldsmiths did. With an alphabet instead of pictograms, one could simply create a type for a letter and multiply it to have several of the same letter. The letters, in the Roman alphabet were regular, separate, and repeatable.13


The letters were then arranged into words, and by adding some spaces where needed, held by a frame, and inked one could print an entire page in one quick step.14 Two workers on one printing press could produce 2500 printings a day. In two weeks, they could produce 1250 copies of a book. A scribe would take a year to scribe a single book!

Gutenberg would have to produce books that were of the same quality as the hand scribed books the elite were accustomed to since they had a distinct idea what a book should look like. The typed pages matched the quality of the calligraphy seen in hand scribed books. He used parchment and artists to decorate the pages exactly as books were being produced at the time.


Not for Quick Profit

When I had a retail jewelry store, I had a goldsmith who could size a ring quickly. I would take in a ring to be sized and after what seemed like a few minutes he would bring me the ring. This caused a twofold problem. I did not get enough time to show the customer any jewelry from the showcases. Worse yet, the customer would look at me and say, “Why did you charge me so much when it only took a few minutes to size the ring?” I had to explain what overheads and profit margins were about. Eventually, I would put an egg timer on the goldsmith’s workbench and set it to a half hour each time I gave him a ring to size while the customer was waiting. That was so he had to wait thirty minutes before bringing me the ring. Doing business in today’s world is no different than in Gutenberg’s day.

Gutenberg did not reveal that he was printing his Vulgate Bibles.15 In fact, one of his books was in in the Landon palace archives some 200 hundred years before it was discovered it was printed. The experts had cataloged the manuscript as hand scribed. Why did he keep his invention secret? Why did he stall giving it to the customer?

The price of a book was based on a year length production. If he were to produce a book in record time and then present it to a customer, they would not have been willing to pay him the prevailing rates for the book. Thus, he would get a pre-paid order and stall giving it to the customer even though he had it completed in record time. That way he could produce more books a year than his competition without increasing his staff. Smart!

Each time I add a scarce gemology, appraisal, or jewelry book into my library, I thank those ancient turquoise miners and a goldsmith. Each time I lovingly open a technical trade book to read what some knowledgeable forerunner is sharing with me - I learn and enjoy because two of my ancient colleagues catapulted mankind into the future.

The Egyptian hieroglyphic for turquoise and in ancient Egyptian was pronounced “mefkat.”    Back to Text ↑ ↑ ↑