Sometimes we learn from historical documents some interesting trivia. In researching patents for Perfect Diagram, I encountered some interesting diamond historical facts.1 In addition, I have encountered a few Twentieth Century cut diamonds during my carrier as an appraiser. This antique cut is an involved cut with 80 facets. The Diamond Dictionary stated that the most prominent departure from the standard brilliant is in the extension of the eight star facets.sup>2

Like most gemologist-appraisers, I recognized the cut and understood it to be an antique cut from the early 1900s.

In researching the Twentieth Century cut I located the patent, numbered 693,074, filed April 4, 1901, granted February 11, 1902 to David C. Townsend. In cross referencing the inventor’s name, I discovered a lawsuit involving an infringement of the patent. Now, it gets interesting.

There was a lawsuit filed in United States Circuit Court, New York, October 3, 1902 by David C. Townsend of Neresheimer against Schenck and Van Haelen.3

I have posted an article about Schenck concerning his patent for polishing the girdle of diamonds. See Girdles.

Who is David C. Townsend?

A Louis Neresheimer from Munich, Bavaria, came to the United States 1880, associating himself with his brother, E. August Neresheimer. They formed a partnership that lasted from 1995 until the end of 1897. At that time, Louis Neresheimer and David C. Townsend bought the business - the firm becoming Neresheimer & Co. This business continued from January 1, 1898 to January 1, 1904. But the business had grown to very large proportions and they formed separate concerns. David C. Townsend & Co. continued the American business, while Mr. Neresheimer & Co., took up the London based business.4

Schenck cited two references that had published the cut two years prior to the patent filing5 as well as naming several others who cut and sell the same cut. Townsend who was a well-known figure in the jewelry6 trade placed an advertisement in Jeweler’s Circular Keystone magazine7 slamming Schenck for knocking off his patent. 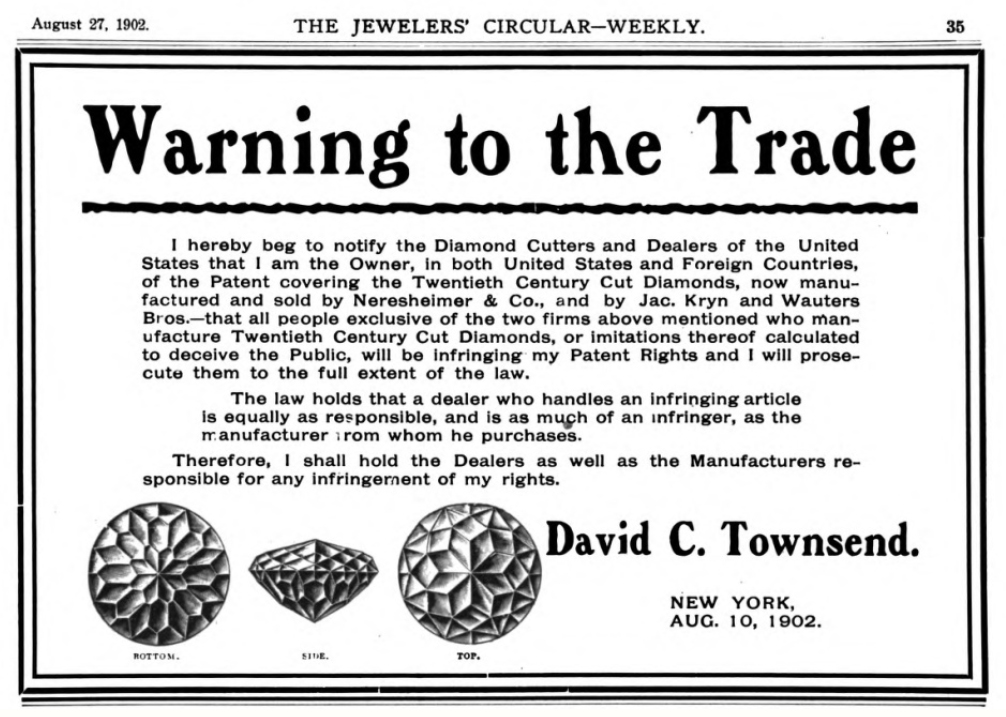 After an exhaustive search, and not unlike mysteries on television that leave viewers without an ending, I could not find out the conclusion of the court. However …

If you open your copy of the Illustrated Dictionary of Jewelry or Diamond Dictionary, it will be discovered that the experts state the twentieth-century cut is the same or similar as the Jubilee cut.

The Jubilee cut has 8 extra facets but otherwise looks the same. “It was named in commemoration of the 60th anniversary of Queen Victoria’s accession in 1897.”10 Under the Jubilee cut in Illustrated Dictionary of Jewelry, the book states that “… There is thus a total of 88 (sometimes only 80) facets. The cut was developed, as an American modification of the brilliant cut, in the early 20th century and named in honour of Queen Victoria’s jubilee (1897); sometimes called the Twentieth-century cut.”11

As you can see the extra eight facets are really the upper eight bezel facets each split into two facets for a total of sixteen.

Trade history to an appraiser is useful in circa dating antique and period pieces. It will also help a gemologist-appraiser to determine if the integrity of an item has been compromised. We can assume that either the Twentieth-century or Jubilee cuts could not be prior to 1885, with a most likely circa date of 1900. However, the cut, stated as a trademark with an illustration of the cut, was listed in the 1904, 1915 and 1922 Jewelers’ Circular Keystone trademark books.12 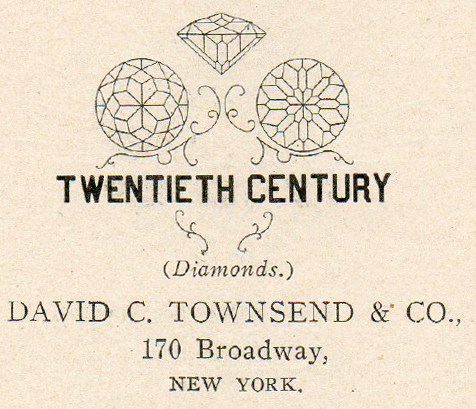