As an appraiser, dates (more commonly called circa dates) are very useful. We learn to recognize circa dates of antique and vintage jewelry by the findings, style of execution, gems, cutting styles and metals – just to name a few clues. If you are examining a blue topaz ring, you would not classify it as an antique. There are lists available to reference when sleuthing circa dates as found in various scholarly valuation books, articles and pamphlets.

Often, I have a client claiming that an heirloom was brought over by her family in the 1700s. To verify or discount that claim, I first see if it is white gold. White gold, depending on what circa date list you like to use, is either 1915 or 1920 as a base circa date. But is that true?

He advertised extensively to the trade as "Belais White Gold,”," as can be seen in trade magazines in the 1920s. An ad from 1922 states “The hand writing is on the wall and it is writ in large letters that David Belais’ White Gold is an epoch making metal.> 4 ” 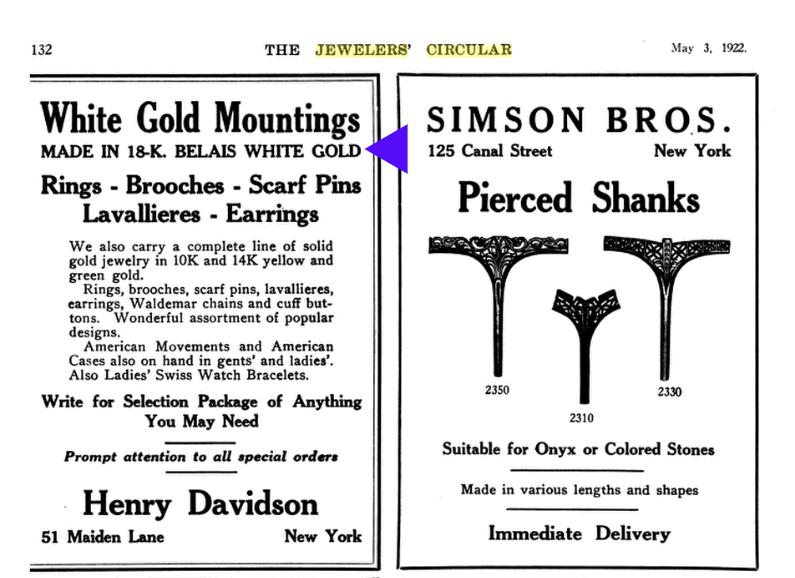 Some vendors also advertised that their goods were “Belais White Gold.5 ”

David Belais was a well known supplier of white gold during the early 1920s. Even today, vintage rings with his trademark are pitched as “… own a piece of jewelry history.” But whose history?

You see the trademark ”Belais” comes in various forms. The trademark was listed as “Belais 18K ” in 1922. However, at least two companies used the trademarks extended with abbreviations, as found with "18KT Belais W.B.” for Werner Brothers and “Belais 18K E & L” for Englander & Leblang, Inc.7 In 1934 merely “Belais” was a trademark for H.A. Wilson Co. of Newark, New Jersey as well as “David Belais .” Just be careful to read the entire mark before making an attribution and a circa date as some pieces of jewelry are stamped with a quality mark and two trademarks.

But was he the inventor of white gold?

There is another patent for white gold that is dated from 19139 filed by Karl Gustav Paul Richter who lived in Pforzheim, Germany. Keep in mind that shortly afterwards, World War I occurred. Thus, very little is known about this “white Gold” other than the patent10. Without a doubt, David Belais was not the inventor of white gold as some jewelry experts claim. 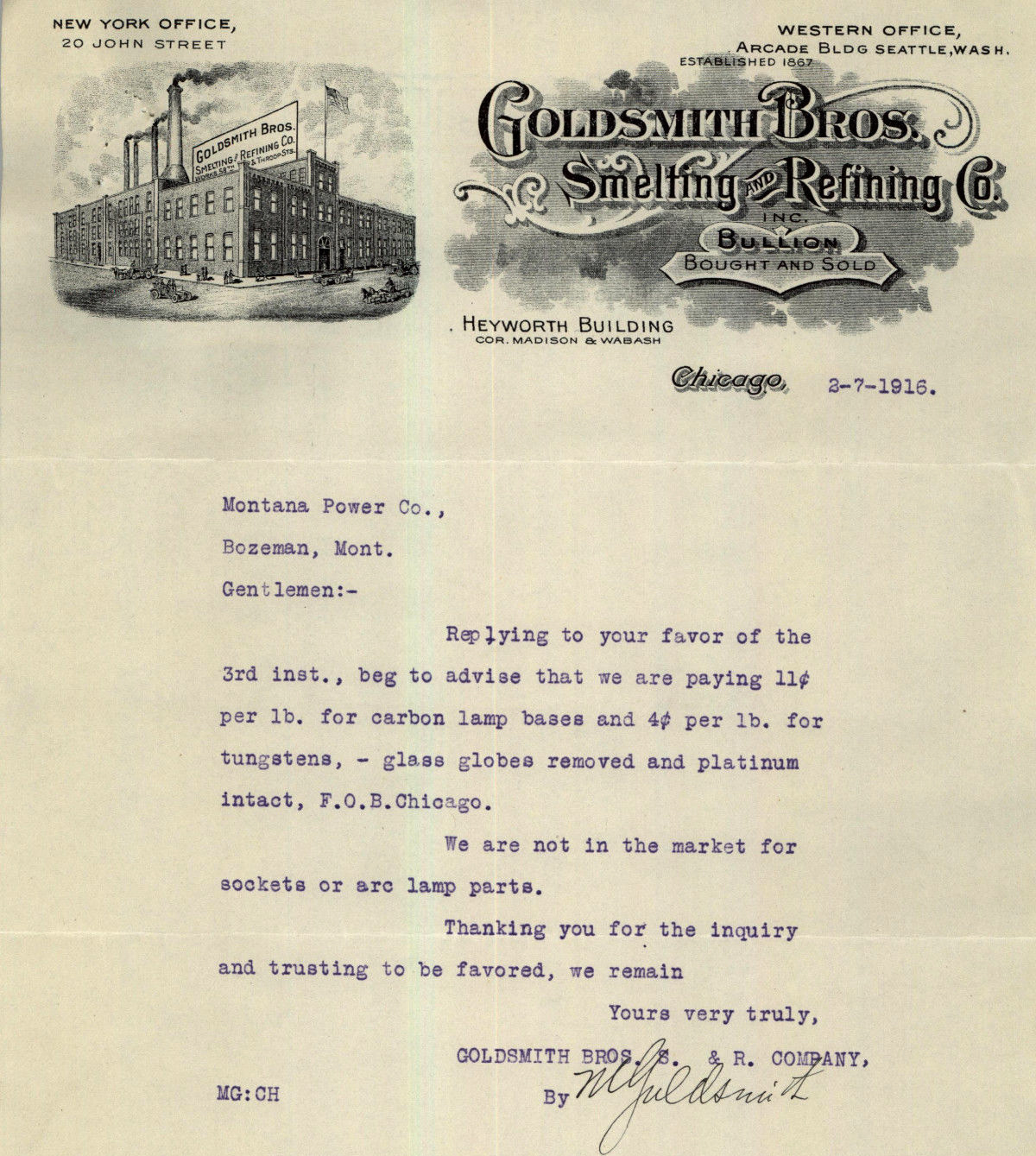 Who are the Goldsmith Brothers12?

Marcus Goldsmith founded the company in 1867 in Chicago, Illinois. His two sons, Moses and Simon, incorporated the business as Goldsmith Brothers, Smelting & Refining Co. sometime in the 1880s. In 1959, they merged with NL industries13.

A glimpse into the company’s long 92 year history reveals that the president was Marc Goldsmith in 1927 and they had a research staff consisting of M. M. Goldsmith (director) and two chemists and metallurgists that their research was initiated in 1909 to include gold, silver, platinum, iridium, osmium, ruthenium, rhodium, palladium, and their by-products14 . But, lets get back to the court case …


Note: Left is a letter from Marc Goldsmith, President of Goldsmith Brothers, written in February 7, 1916 - from the author's collection of jewelry related Ephemera.

Sometimes, we find circa date information in unexpected places, and this litigation was no exception. The court case did provide some other critical circa date information. It made it clear from the refiners who also sold precious metals that “Platinum was introduced as a jewelry metal about the year 1890 …”

And “In 1910, by the addition of iridium, platinum was made harder, and it became a recognized and desirable metal for jewelry, particularly for the setting of diamonds.”

And the court recounted some historical information about platinum used in jewelry. It opined, “In February, 1918, this country then being at war, the government commandeered platinum for war purposes, leaving in the hands of the jewelers only finished pieces and a relatively small amount of workable platinum. The supply of platinum for the time being was cut off. It is quite apparent from the record that the cutting off of the supply of platinum stimulated the demand for 18 karat white gold. It is in evidence that various alloys making up the so-called 18 karat white gold were sold prior to the filing of plaintiff's application. A meeting of representative manufacturers of platinum jewelry and retail jewelers was held in May, 1918, to consider steps to prevent unscrupulous dealers from foisting platinum imitations on the public, lest it destroy the legitimate demand for platinum jewelry, particularly in view of the commandeering of platinum by the government.”

Meanwhile Back at the White Gold Ranch

The case mentioned that Haffner introduced white gold from Germany in 1913.15

Now we have pushed back the circa date to 1913 … however, is that white gold’s oldest circa date?

The court discussing the date of white gold declares “Assuming, for the moment, if the Haffner and Sheff16 golds, by reason of the fact that they have a percentage of nickel greater than the claim under consideration, and thereby are taken outside of the patented product — for it is a product, and not a process — they certainly are evidence of the prior art by which we may measure the change which Belais claims to have made.”

Now we learn that white gold was being made prior to 191317.

The court continued “In addition to Haffner and Sheff, evidence was produced to show that Baker, Herpers, and Handy & Harmon, prior to the patent herein, made gold alloys … Skilled workers in the art knew, long prior to 1918, the effect of varying the proportions of the several base metals in white gold alloys”.

David Belais lost his case – his white gold was not really an invention but rather a new formula for what already existed … white gold.

The court concluded “I am of the opinion that the Belais formula is the result of a mere selection of proportions to give a desired character, whiteness at the expense of ductility, and that such selection is in accord with the normal development of the art in making white gold. I do not believe that the Belais formula, even if better than others which preceded it, is an invention. The development of an old idea, and changing merely the degree, certainly does not involve invention. Novelty in proportions involves something more than merely figuring out differing proportions that were well known before. A new metal must be developed, in the sense that new results come from the new proportions, and substantially better results so far as utility is concerned must be present … For the reasons stated, I am of the opinion that the patent in suit is invalid for want of invention. Settle decree for defendant on notice.”

A New Circa Date

It was tantalizing to discover that white gold was being used before the 1913 circa date. But when?

I reviewed trade publications from the late 1880s up to 1910 with no mention of white gold. However, in a 1911 publication white gold was mentioned in advertisements18. 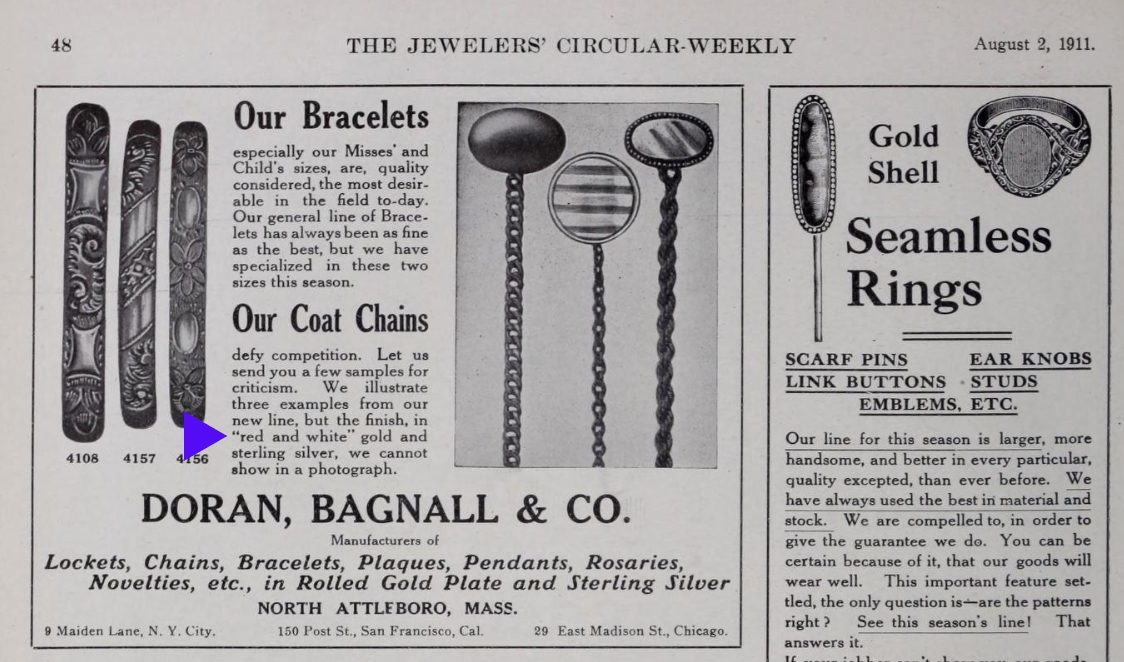 I propose that 1911 be used for the circa date for white gold but expect to change it to an even earlier date as new information becomes available. Remember, the court stated “ … workers in the art knew, long prior to 1918, the effect of varying the proportions of the several base metals in white gold alloys.”

As we march into the future, the past becomes less clear. 1911 is over a hundred years ago and we cannot simply call or email someone to ask them to verify or add precision to a circa date. Thus, circa dates are theory and subject to change.

But we gained three precious metals’ circa dates, namely …